DooCycle: A To Do app ahead of its time

It is not about what you are about To Do, but what you have done and what fun stuff to do next.

I hate To Do lists. With a vengeance. I make them, I break them. Some time ago, I already wrote a rant on To Do lists or apps and created a small script that would fill my calendar with gentle reminders. What still bothers me are those chores that pop up more or less regularly, but not regular enough to be part of my daily routine. Laundry of instance; some weeks I don't do any, then I do 3 washes in a day, or spread out over the week. Clipping my nails is not a thing I do at a particular day, but more or less once a week or.. I don't know actually. And when was the last time I tidies the attic? Would it be about time to do it now?

So the idea is rather simple, by tracking when I did what I can show in an app what is most probably that I would have to do in the near future. It can show me what is overdue, what I did not do in such a long time I might consider it again and what I don't have to bother about. By using AI, I can make better and better predictions for when something is due. I will have to consider several different cases:

In the first prototype I hacked together a functional single-user (that's me!) app with a Cloudstore database and a Bootstrap UI. Its current features: 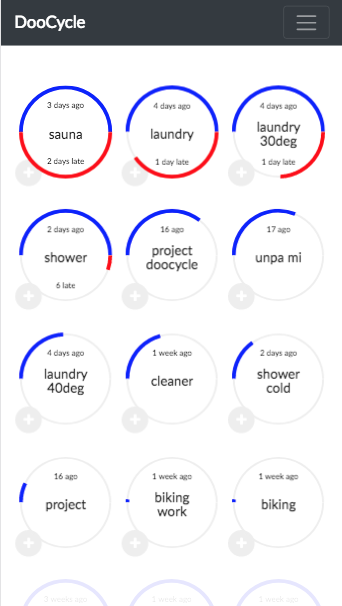 I have been using it now for a while and it is rather fun and informative. It takes very little time to add existing activities and I am actually reminded and motivated to do certain chores or work again on certain projects.

Plan for next protoype

First things to do are: